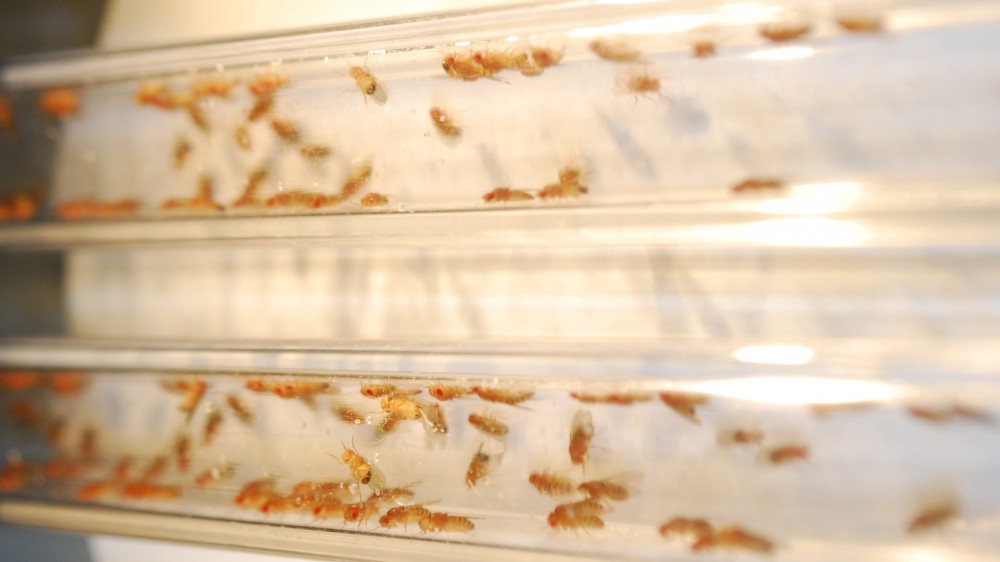 A new model of mammalian prion disease has been developed in the fruit fly by a team led by Dr Raymond Bujdoso at the University of Cambridge.

A new model of mammalian prion disease has been developed in the fruit fly by a team led by Dr Raymond Bujdoso at the University of Cambridge. The study, co-funded by the NC3Rs and published recently in Biochemical Journal, could lead to a fast, low cost blood test to diagnose prion disease without using mammals as models.

Prion diseases are fatal neurodegenerative diseases affecting various mammalian species and include conditions such as Creutzfeldt-Jakob disease (CJD) in humans, scrapie in sheep and bovine spongiform encephalopathy (BSE) in cattle. These conditions are associated with misfolding of the normal prion protein into a disease-specific form, and pose an additional risk because they are transmissible across species.

The current bioassay used to detect infectious prions in blood samples typically involves injecting the material into the brain of genetically modified mice that express the prion protein of the donor species. Less often, the assay involves using the recipient species, for example, in the case of ovine scrapie-infected blood, transfusing material intravenously into recipient sheep. The next step is waiting to see whether the animals develop prion disease. Animals used in these bioassays can suffer from neurological signs, such as hind limb paralysis in prion-infected mice, which causes significant welfare concerns. Not only are these assays stressful to the animals, they are also slow and cumbersome, since the incubation time for prion disease may be over a year.

Rather than working with a sheep or a mouse model, Dr Bujdoso and colleagues chose to work with a less sentient host. They developed a genetically modified fruit fly (Drosophila melanogaster) that is able to express ovine prion protein, which becomes misfolded when in contact with sheep scrapie prions. When the researchers fed the flies with sheep blood samples known to contain prions, they found that this caused prion disease in the flies: the affected flies showed decreased mobility and the presence of misfolded prion protein. This response to prion-infected blood, which can take around a year in mice, was evident within only a few weeks after exposing flies to the material.

The fly model has the potential to be developed into a test for prion infectivity which could avoid the use of genetically modified mice or other vertebrate species. The test could be used by medical and veterinary professions as a quick screen for active and passive surveillance of prion diseases in the UK. Developing an invertebrate model of mammalian prion disease could also improve the understanding of prion biology, in human and animal disease.

Dr Bujdoso said: ‘We have found the fruit flies respond so quickly to infected blood that it means we can develop a faster, more versatile and more sensitive test to detect infectious prions in blood than currently exists.

‘At the moment, screening blood or blood products for prion infectivity is expensive and time consuming, and requires the use of a large number of experimental animals. A novel, more efficient test will enable routine screening and quicker diagnosis of potentially prion-infected blood samples.

What’s more, the development of a blood test that could easily and reliably screen for human prion-infectivity would represent an ideal solution for identifying human donors and blood donations that might present a risk of causing variant CJD.’

The article is currently available to Biochemical Journal subscribers and will be made open access in December this year.