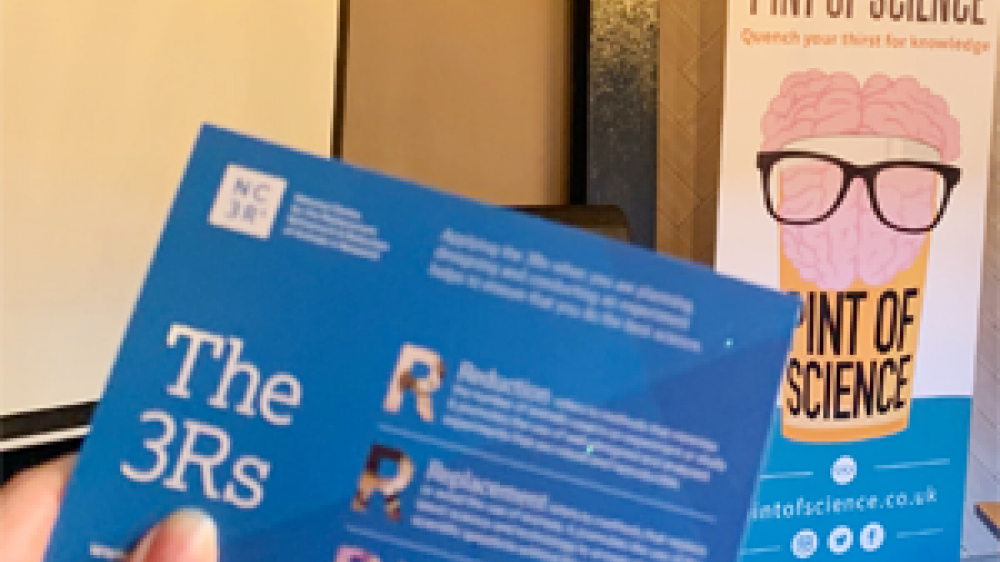 Last month we sponsored three events as part of Pint of Science, an annual festival that invites researchers into pubs and cafes around the world to speak to the public about what they do.

Each year we showcase the work of NC3Rs grant holders in different cities across the UK – here’s what we got up to in 2014, 2016, 2017 and 2018. This year, we headed to Newcastle, Birmingham and London. Each night featured two or three speakers, many of them in the early stages of their careers, who shared their 3Rs-focused research in an engaging, accessible way.

To kick off this year’s event, Dr Tom Smulders from Newcastle University spoke about how the way laboratory mice are picked up affects their behaviour, physiology and welfare. He is working to support the adoption of non-aversive methods of handling mice in studies focusing on a range of conditions, including cancer, cardiac disease and neuropathic pain. Tom invited the audience to explore the factors researchers might consider when switching from tail to tunnel handling, something he has first-hand experience with.

Dr Matt Leach, also based at Newcastle University, shared his work on grimace scales, which are used to assess pain and distress in animals based on changes in their facial expressions. In his talk, Matt described how the scoring system is used in a range of animal species and encouraged the audience to try it for themselves by applying it to videos of rabbits. He also discussed how grimace scales can support better animal welfare – for example, by helping researchers provide appropriate analgesia.

The second evening began with a talk by Dr Scott Davies, an NC3Rs Training Fellow at the University of Birmingham. Scott studies immune interactions in chronic liver disease, using microscopy and liver tissue obtained from patients undergoing transplants. He explained how this approach provides more relevant information on how immune cells behave in human disease than animal models do. He also used the analogy of getting sweets out of a jar to explain how multiphoton microscopy works, which went down a treat with the audience.

Laura Feather, a final-year NC3Rs-funded PhD student at Aston University, presented her work on reducing the use of animals in vaccine development and screening. Laura is developing an in vitro assay to predict how effective new vaccines are in humans by testing the immune responses of human white blood cells. Her project has already had some impressive impacts, with the use of about 150 mice avoided through another research team adopting her technique.

The University of Birmingham’s Dr Alexandra Iordachescu spoke about the 3D in vitro bone model she developed during her PhD studentship to study bone formation and maturation. As an NC3Rs Training Fellow, Alex is now using the approach to investigate the bone loss that occurs when weight bearing is reduced – for example, during ageing, immobilisation or in weightlessness. She stirred the audience’s imagination when talking about her collaborations with space agencies, including recreating microgravity on Earth.

Last but not least, our London event focused on the work of Dr Rickie Patani, winner of the 2018 3Rs prize, and his team, who developed a human stem cell model of motor neuron disease, also known as amyotrophic lateral sclerosis (ALS). The team is based at University College London and the Francis Crick Institute and the audience heard presentations from two PhD students, Jacob Neeves and Ben Clarke.

Jacob shared his personal career story of becoming a vet, then moving over to researching neurodegenerative diseases in non-animal models. He spoke about how human stem cells can be used in ALS research instead of rodent models, which are not representative of what happens in patients and are associated with significant animal welfare concerns.

Ben followed up, going into more detail about the disease mechanisms that can be explored using human stem cell models. He described how, as well as being used to generate neurons, stem cells can also be used to create other types of cells that are involved in the development of ALS, particularly astrocytes. This was followed by a drawing competition that featured some excellent pieces of art inspired by the evening’s talks.

We would like to thank all this year’s speakers and organisers for doing such a fantastic job. Check out #pint19 for more tweets from Pint of Science events across the globe.