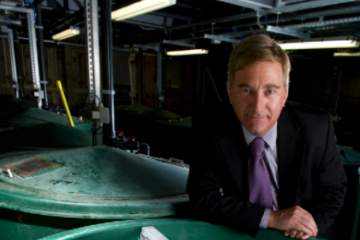 This project aims to extend a method developed for the non-lethal collection and analysis of blood and mucus from fish to the study of the infection by the ectopic parasite, Paramoeba perurans.

To develop control strategies for diseases of farmed fish, experimental infection in contained facilities is a common requirement. Traditional experimental fish infection studies are based on the sequential culling of infected animals at different time points. These use large numbers of fish because of the need for cohorts for each time point and the high inter-individual variability. A new method of collecting small blood samples from the same individual fish over the course of infection has previously been funded by the NC3Rs to reduce the number of animals used and is currently being developed to analyse fish responses to viral and bacterial infections. Extending this method to the study of fish infected by the ectopic parasite, Paramoeba perurans, which causes Amoebic Gill Disease, would reduce the numbers of fish required for such research by 80%.

This project will investigate whether small amounts of mucus from gills can be used to detect localised responses to ectoparasites, and to correlate these with levels of chemokines and cytokines found in underlying tissues collected by lethal sampling for validation purposes. A range of assays will be used to identify key immune responses. The feasibility of monitoring disease progression through the quantification of parasitic load in water, and disease progression in fish through digital analyses of lesions will also be investigated.

Every year 200,000 fish are used in the UK for fundamental or applied research. To develop control strategies for diseases of farmed fish, experimental infection in contained facilities is a common requirement.

Traditional experimental infections in fish are based on the sequential sampling of different infected animals, often resulting in high inter-individual variability. In addition, the relationship between differences/timing of response in any one individual and disease outcome in that individual can be difficult to see. A new experimental model collecting small blood samples from the same individual over the course of infection is currently being developed under an NC3Rs project to analyse fish response to viral and bacterial infections. The aim is to reduce fish numbers through use of same fish at all time points, and to improve data robustness through reduced variability and better relatedness. A reduction in the number of experiments, in the long term, needed to answer a question can be expected.

This PhD proposal aims to extend the model to ectoparasites using non lethal collection and analyses of blood and mucous. Amoebic Gill Disease (AGD), caused by the amoeba Paramoeba perurans, will be used as a model.

AGD is emerging in Europe as a serious threat to the valuable salmon aquaculture industry, though it is also a potential threat to other aquacultured species. Mortalities of up to 70% have been recorded on fish farms. Questions related to the biology of the pathogen, the immune response against it and the efficacy of treatments need addressing and we can predict that in the coming years numerous academic laboratories and commercial RTD departments will undertake experimental infestation to understand the host response or evaluate treatments. Mucosal responses are of interest due to the disease manifesting in fish gills. Studies on fish mucosal immunity are increasing but there is still much to learn e.g. fish IgT immunoglobulin, thought homologous to IgA in mammals, was relatively recently found associated with mucosal tissue in fish.

A non-lethal model for studying fish immune response to ectoparasites using sequential sampling from the same individual has not previously been attempted. Lethal sampling, including analyses of response in kidney (systemic) and gill (localised) tissue will be conducted alongside for comparative purposes. The ability to utilise small amounts of mucous from gill (to reduce any impact on disease development/parasite load), to detect localised responses, and to correlate to cellular responses found in underlying tissues will be investigated. The latter will include looking for leached chemokines and cytokine in the mucous, again, a novel approach in fish. Methods such as RT-QPCR, IHC, ISH, FACS, histology, enzymatic assays will be used to identify key immune responses and changes therein. Approaches to monitor disease progression through quantification of amoebae load in water, and disease progression in fish through digital analyses of lesions will be investigated. The expected outcomes will be i) a challenge model to generate more robust data with accurate correlation between infection dynamics and host immune parameters; ii) a reduction in the number of animals required for experimental challenges of over 80 %; iii) informative data on the host immune response to P. perurans infestation and disease outcome as a basis for further applied fundamental/applied research. The non-lethal model if successful can be applied to other important ectoparasites of farmed fish. The research workplan in the project will be combined with a training programme on academic subjects and on disciplines relevant to the professional environment. Results will be disseminated to the scientific community through peer-reviewed and trade journals, presentation at international conferences and to the relevant industries, and to the public through websites and opendays.