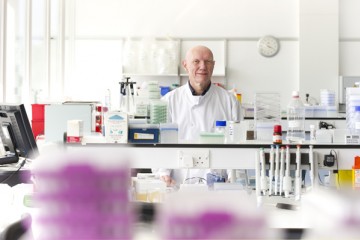 Clostridia are responsible for a wide range of animal diseases, and clostridial vaccines are among the most common veterinary biologicals. Clostridial diseases are mediated by toxins and vaccines comprise toxoided forms of these toxins. During manufacture toxin production is measured and the amount of toxoid antigen quantified. These stages rely on animal testing. The toxins are measured by minimum lethal dose (MLD) and/or L+ tests in mice and the toxoids by total combining power (TCP) assays, in mice. The replacement of these tests with in vitro assays would significantly reduce animal usage in vaccine production. As a veterinary vaccine manufacturer, Intervet produces a wide range of clostridial toxins and toxoids. To meet regulatory requirements each batch of these materials is subjected to MLD, L+ and TCP testing. As part of our ongoing research programme the company has created hybridomas producing MAbs to several clostridial antigens and will continue to create more. These MAbs are being used in the development of ELISAs capable of quantifying various clostridial toxins and toxoids. However, the quantity of a toxin or toxoid measured in an ELISA does not necessarily directly relate to its biological activity, i.e. toxicity or antigenicity. In addition to developing ELISAs we have experience in the use of cell lines to detect clostridial toxins and the application of the Biacore system to antigen quantitation. The intention is to develop in vitro assays to replace the current in vivo tests. ELISA and/or Biacore assays will be developed to quantify the toxins and toxoids. Cell lines will be investigated as methods for measuring the toxicity of specific clostridial toxins and the antigenicity of their respective toxoids. The in vitro assays will be compared within vivo tests, which have to be performed as part of the routine QC testing as required by the regulatory authorities, and checked for correlation. One major advantage is that the performance of the in vivo tests, is part of the normal vaccine manufacturing processes. This means that the necessary validations and correlations with in vivo tests can be done with minimal animal usage. The potential reward for replacing the MLD, L+ and TCP tests is great. Intervet, as just one veterinary vaccine manufacturer, uses an average of 8500 mice per year performing these tests on clostridial components. Suitable in vitro assays could completely replace the use of animals in testing at these stages by all producers.