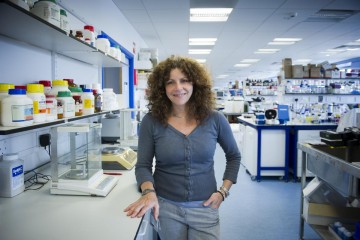 Spinal cord injury (SCI) usually results in devastating paralysis, which in the majority of cases is permanent due to the limited capacity of central nervous system (CNS) axons to regenerate. Laboratory models of SCI generally involve the use of animals and are technically demanding, time consuming and are followed by substantial disability in the animals with long-term post-operative care. Furthermore, biological variations in the level of injury necessitate the use of large groups of up to 10 animals in each cohort in order to impart statistical power into the data. It is now apparent that therapies for SCI will require combined strategies which require even larger cohorts of animals.

We have developed a cell based assay of SCI which reduces the number of animals necessary to test potential therapeutic agents for SCI as well as removing any suffering to the animal. These cultures comprise of a monolayer of astrocytes on top of which are plated dissociated rat mixed spinal cord cells. The cultures produce a carpet of neurites which become ensheathed with myelin internodes by oligodendrocytes interspaced with nodes of Ranvier. A lesion is created across the culture with a scapel blade, which is initially cell free and persistently lacks neurite outgrowth, although many reactive astrocytes then enter expressing markers associated with astrogliosis and inhibition of axonal outgrowth. These findings are in agreement with that seen for in vivo models of SCI. The cultures were validated as a SCI model by treating with agents known to promote repair in vivo. These include a cell-permeable form of the C. botulinum-derived Rho antagonist, C3 ADP-ribosyltransferase (C3), which promoted neurite outgrowth in these cultures with a concomitant reduction in CSPG levels. However, myelination was only enhanced when C3 was introduced together with the ROCK inhibitor Y-27632 or the PDE4 inhibitor rolipram.

We now wish to develop these cultures using topographical cues to focus specifically on neurite outgrowth and regeneration after cutting. We will use novel constructs made from polydimethylsiloxane (PDMS) with topography to promote aligned neurite outgrowth and restraining pillars at one end of the device to isolate the neuronal cell bodies from their processes. The cultures will be standardised and validated with a range of agents known to promote axonal outgrowth. We aim to identify a combination of agents which could potentially be used in the clinic to promote SCI repair.