Galleria mellonella as an infection model for viral pathogens 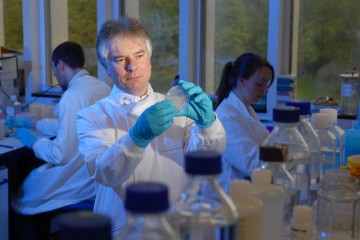 This award aims to determine if wax moths (Galleria mellonella) are susceptible to insect-borne viruses and whether the larvae could replace mammalian species used for modelling viral pathogenesis.

Galleria mellonella larvae are used as an infection model for bacterial and fungal pathogens but there are currently no publications reporting the use of Galleria as a model for viral infections. Viruses can only infect specific species (or hosts) so researchers use a range of mammalian species such as mice, rabbits and non-human primates dependent on the natural host of the virus. However, some viruses that infect humans replicate in insect vectors and Galleria may also be susceptible to these infections. Galleria provide a number of scientific, technical and ethical advantages over the use of other invertebrates, cell lines or murine models. The Galleria immune system contains hemocytes which, similarly to macrophages in humans, can engulf pathogens. This is an important infection stage to model in humans as it can be an indicator of the outcome of infection and cannot currently be modelled using in vitro methods. Galleria can also be infected and incubated at 37oC allowing infections to be studied at the same temperature as in humans, which is important for cellular kinetics and temperature-sensitive protein production.

This project grant was awarded under the 2019 highlight notice.