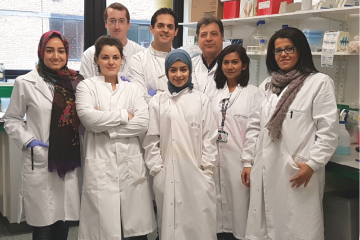 Protein degradation via the ubiquitin-proteasome system is a key cellular mechanism that regulates protein activity. Specificity of this pathway is granted by an F-box protein, and to date, more than 70 F-box proteins have been found within mouse and human genomes. A number of critical pathways, such as cell growth/survival/death are regulated by F-box proteins and mutations in these proteins are often implicated in cancers. Around 10 to15% of colorectal cancers share a mutation in a common F-box protein. Genetic studies of these proteins are incomplete owing to the size of this protein family and in vivo studies are not always possible due to embryonic lethality of knockout mutations.

This PhD Studentship aims to replace genetically modified (GM) mice for the study of F-box proteins with 3D in vitro intestinal organoid cultures. Relevant mutations will be introduced with the CRISPR/Cas9 genome editing system.

The generation of GM mice containing relevant homozygous mutations requires approximately 400 to 500 mice per year. Dr Shams Nateri predicts a further 400 to 500 mice are required for functional experiments to determine the effect of the removal of the F-box protein of interest. The use of in vitro organoid models and genome editing systems has the potential to replace all the mice needed for these studies.

3D intestinal organoids replicate gut physiology more faithfully compared to 2D monolayer stem cell models as stem cells cannot differentiate into fully mature intestinal epithelial cells. A novel fluorescent/luminescent-based screening system will be employed for the creation of knockout organoids. The use of this system will allow for the creation of a large scale organoid library with targeted editing of F-box proteins. Any phenotypes derived from this library can be fully explored and the attributed mutation identified. The increased complexity of the 3D intestinal organoid, compared to 2D models, also allows for the model to be potentially used in drug screening studies.

One of the key cellular mechanisms of regulating the activity of many proteins on a post-translational timescale is through protein degradation using the ubiquitin-proteasome system. Specificity of proteolysis for any particular substrate is determined by its association with a specific E3-receptor subunit. F-box proteins are the substrate-recognition components of the E3-ubiquitin ligases. The human and mouse genome comprises 70-75 F-box proteins that are incompletely studied.

The analysis of gene function in vivo is not always possible due to the lethality of knockout mouse. The experimental plan will use previously developed in vitro 3D organoid cultures to study the functions of E3s. Lentiviral gene overexpression and CRISPR/Cas genome editing will be used to modify genes in organoids.

1) to develop a new fluorescent/luminescent-based screening for knockout organoids in combination with the CRISPR/Cas system. We will apply this method to analyse loss-of-function phenotype of FBXW7-E3 enriched in intestinal stem cells.

2) We will establish large scale CRISPR/Cas-mediated mutagenesis in organoid cultures by a gRNA-expressing organoid library targeting F-box-type E3-ligases. Site-specific mutagenesis in organoids will be generated by inducible Cas9 recombinase. For an example, we will these organoids to screen E3s essential for growth, proliferation and differentiation. gRNAs in mutant clones will be sequenced and the gene responsible for the phenotype will be identified.

The main objectives are:

ii) to understand the role of F-box-type E3-ligases.

This study will provide useful genetic tools for organoid cultures and will demonstrate the efficacy of in vitro systems to study gene functions. Mouse geneticists will be encouraged to use organoid cultures as the replacement for in vivo studies.