MacuSIM: A microfluidic, in vitro model of the outer retina as an experimental platform for macular disease and therapeutic trials 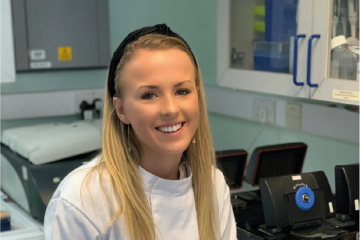 Why did we fund this fellowship?

This award aims to replace the use of rodents and monkeys in studies of Age-related Macular Degeneration (AMD) by developing a microfluidic in vitro model of the human macula.

The underlying cause of AMD is not fully understood, and researchers have developed a number of in vivo models to provide insights into the disease. Models can either be spontaneous, where animals develop aspects of AMD naturally, or induced, for example by damaging the eye with a laser in a controlled manner. Rodents are most commonly used, however, they do not have an anatomical macular, the specialised part of the eye that is affected in AMD. Monkeys have an eye anatomy most similar to humans and have been used in some ageing studies to investigate macular pathology. In vitro models are available, but these often do not recapitulate the complexity of macular vasculature. In humans, the central macular encompasses a zone free of vasculature to ensure light can reach the retina. The presence of this zone is thought to be a key component in the risk of developing AMD and is not present in current in vitro models of AMD.

During her NC3Rs-funded PhD, Dr Savannah Lynn developed an in vitro method using cultured human retinal pigment epithelium (RPE) cells and demonstrated the model recapitulated characteristics of early AMD such as drusen formation and inflammation. During her Fellowship, Savannah will now combine these methods with microfluidics and 3D printing to incorporate both vascularisation and the vasculature free zone and establish an in vitro model of AMD – termed MacuSIM. She will develop skills in immunofluorescence, electron microscopy and computer-aided design.