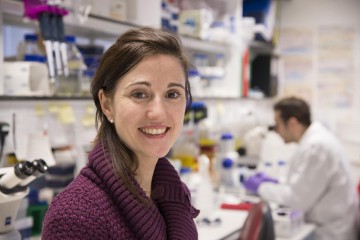 Liver cancer has a poor prognosis and limited treatment options. There is also a lack of models that accurately represent the heterogeneity of human liver cancer, which complicates treatment as a single drug may impact parts of the tumour differently. Cells can be isolated from patient tumour tissue and implanted into immunocompromised mice to form a patient derived xenograft (PDX) model. These models have successfully been used as a test for therapeutics but are not possible for many patients as the success rate for implantation is low. PDX models are also not amenable to large scale drug testing, such as compound screens to identify potential candidate therapeutics, due to the large amounts of resource and animal numbers required.

Dr Huch estimates a typical study to investigate one potential drug compound to treat one form of liver disease could require up to 50 animals per experiment. Through the development of an organoid culture method enabling mouse stem cells to grow and expand into fully functioning 3D liver tissue, this was already reduced to one mouse per experiment. Over 1,500 publications using “animal models” in “liver cancer” have been published in the last three years with an average of 20 animals required per publication resulting in a total of approximately 33,000 animals. This estimation excludes animal use in industry. The use of human tissue could replace the need for mice entirely.

An organoid culture system has been previously developed by Dr Huch and colleagues from the University of Cambridge to expand healthy human liver tissue and used to model genetic human liver disease.1 The aim of this Project Grant is to use the organoid culture system to expand and culture liver cancer tissue obtained from biopsies for several months in vitro. The tumour organoids will then be characterised to determine whether their histology, molecular expression and genetic status is sustained during organoid culture. This will be achieved by comparing the tumour organoids to control organoids formed of healthy human liver tissue. The ability of the tumour organoids to engraft and grow as tumours in vivo will then be assessed using immunocompromised mice, to ensure the tumour retains the patient’s specific cancer characteristics after time in in vitro culture. The organoid culture system will then be assessed for its potential in preclinical drug development screenings. A library of anti-cancer drugs will be applied to the organoids at varying concentrations to assess the impact of the drug on the cancer cell viability before assessing whether tumours are sensitive, or resistant, to each drug tested.