Hosting an institutional workshop on the 3Rs 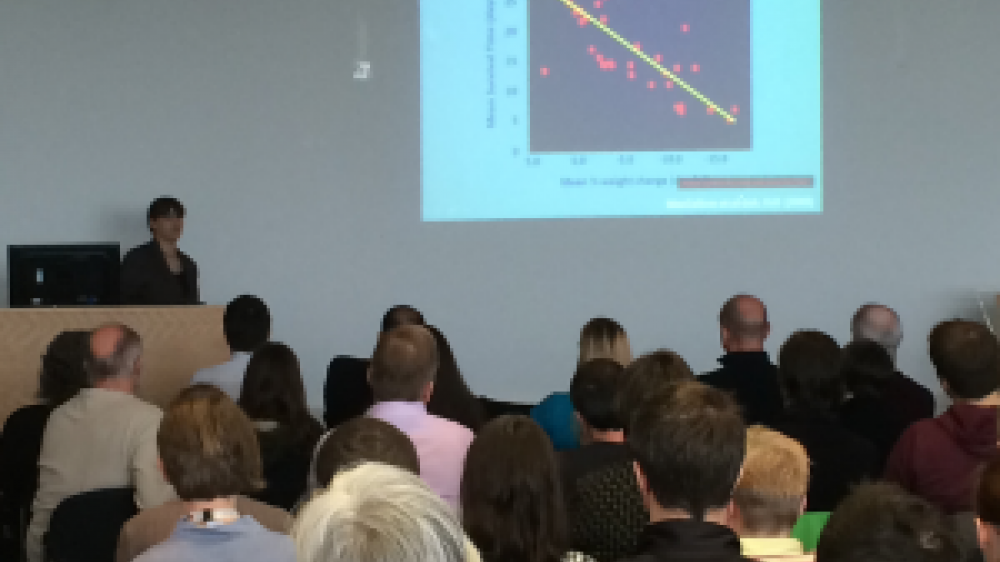 Well attended and ultimately successful as an informative workshop that engaged delegates and met its overarching objective of widespread promotion of the 3Rs to academics and support staff alike.

Iain Grant, Policy Adviser at the university, who was involved in bringing the event together, tells the NC3Rs about his experience of organising the day.

Recently I was asked to organise a large workshop to promote the 3Rs, to include speakers and an audience of stakeholders (from licence holders, to named individuals, to support staff and so forth) from across the sector.

Like most large undertakings, this task became less daunting when the overarching objective of the day, and how to deliver it, was simplified. So what was this objective? As an institution, by way of best practice, we want to be more proactive in promoting the 3Rs to our licence holders and other key stakeholders and one effective way of doing this, we previously agreed, would be through training and events. This is how the 3Rs day came about. The day was intended to promote the 3Rs by delivering an informative and engaging workshop which would give attendees information and ideas they could take away, work with and apply to their research, ultimately leading to better implementation of the 3Rs.

Working with the NC3Rs

In order to make this is a success, we agreed that we had to offer a range of speakers who would compel people to attend; speakers with authority on research in their disciplines and implementation of the 3Rs; speakers with a track record of success; and, speakers with expertise which delegates would be keen to learn from. We also wanted to include external colleagues from across the sector to add breadth and diversity to the event and to add something new and different, notably for internal attendees.

To this end, we were quick in identifying staff from NC3Rs as potential flagship presenters. Our rationale was simple: not only is the NC3Rs an authority on the 3Rs, providing a benchmark for the sector and high level guidance (such as the ARRIVE Guidelines), but it also offers research funding opportunities ̶ a carrot researchers are quick to recognise. So we approached the NC3Rs with an outline plan and an invite, and we were delighted that they were more than happy to oblige. And thus, the ball was rolling.

Our Named Veterinary Surgeons (NVSs) played a key role in identifying potential speakers and approaching them to ask if they would be happy to present. This included NC3Rs grant holders at the University and neighbouring Marine Scotland Science, who could talk about the work undertaken on their grants, an internal 3Rs champion who also used the event to promote the ARRIVE guidelines, and a number of researchers and support staff (including a Named Animal Care and Welfare Officer) who had all made notable efforts to implement the 3Rs in their own work. Our NVSs were able to use contacts from across the sector to invite external speakers from other institutions, while we also invited the Home Office Inspector to talk. We allocated 10-20 minutes to each speaker, factored in time for questions and discussion, and from there constructed our agenda for the day.

We also sought two high profile academics in this field to “host” the event (one for the morning session and one for the afternoon) and were delighted when two of our most successful researchers agreed. Their job was important in bringing the whole event together and giving it a natural flow on the day. They would introduce each speaker and address the audience after each presentation to take questions and spark debate. We made their job easier by gathering a summary from each presenter beforehand of their career history to date, in order that the introductions before each presentation were informative and told the audience a bit about each speaker. And of course, we couldn’t host such an event without securing the services of the Establishment Licence Holder, also our Senior Vice-Principal, Professor Steve Logan to open the workshop and welcome all in attendance. He was happy to oblige and to stress the importance of the 3Rs.

After that, we were left with meeting the practicalities. We booked one of the University’s best conference facilities for the day and then booked the catering. We made a number of hotel recommendations for those who were travelling a distance to the event and staying overnight, and provided maps to all delegates and speakers on request, showing exactly where the event was taking place, to make it as easy as possible for all interested delegates to attend.

To promote the event, we issued regular bulletins to all internal stakeholders (from licence holders to support staff, to AWERB members and so forth), and were sure to release the finalised agenda well in advance, therefore highlighting the quality of the speakers. We did not ask people to register to attend, but did ask that they notify us if they intended coming along, if nothing else for an idea of numbers and catering. As the event drew near, we were nearing capacity and thus scaled back our internal promotion. Externally, our NVSs networked extensively with colleagues from different institutions, highlighting the agenda and issuing invites. This was an important part of the process and was key in securing both external speakers and attendees.

I’m pleased to say that the event went very well. We had almost 100 delegates in attendance, some external to the institution, and we were pleased that the vast majority stayed until the end. Of course, it helped that the presentations were very well received, with all speakers adding something different and all talking with passion and enthusiasm for their work.

The event has also led to a number of positive outcomes. For example, internally, a number of delegates have expressed a desire to be part of the new University Animal Welfare Group, which will be a sub-group to the AWERB, with a remit to address better implementation of the 3Rs. A number of local institutions also expressed an interest in joining this Group, including the James Hutton Institute, RGU and Marine Scotland. This would lead, among other things, to sharing of best practice. A number of Aberdeen researchers have also stated that they will now look more proactively at options for NC3Rs funding. Further afield, specific examples of delegates looking to implement what they learned via the presentations on the day have also been fed back to us: we were told that, having noted a good example of refinement during a presentation, an NVS from Edinburgh was looking at housing the vasectomised mice with female mice so they are not housed alone. In a wider, more general context, delegates from Glasgow and Edinburgh have suggested that different institutions across Scotland could better collaborate in hosting such events, and could streamline activities so that events are hosted by other institutions and evenly spread out throughout the course of a year, allowing delegates from all institutions to attend and share the benefits. These outcomes are to name only a few, but illustrate the value of putting together a workshop like this, both in terms of the immediate impact for researchers on the ground, and also with a view to bringing institutions together to work in partnership and to work more effectively going forward.

Finally, if I was to pass on one key piece of advice to anyone tasked with organising an event like this, I would say focus first on the speakers and the agenda. They provide the foundation or the core which will ultimately attract not just an audience, but the right audience, and that will determine whether the event is a success or not. Once they are in place and the agenda set, the rest can be pieced together with relative ease.

This post is a good example of implementing our Institutional Framework.