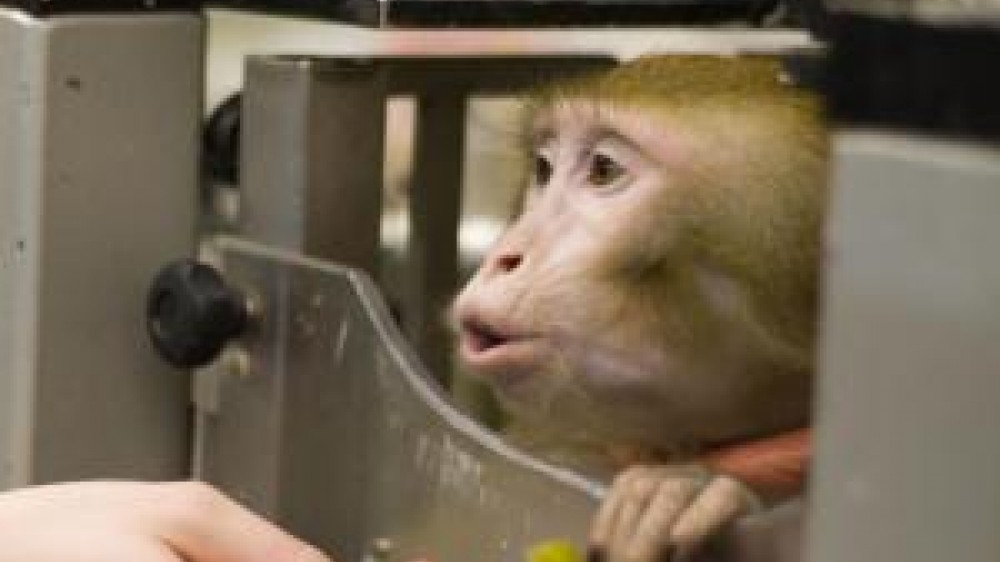 Work from an NC3Rs-funded PhD studentship has demonstrated that the level of fluid control used in macaque experiments can be minimised by identifying preferred fluid rewards.

The research, recently published in Laboratory Animals, confirms that using preferred rewards can improve the performance of macaques in cognitive tasks, which can be advantageous because the animal may work reliably on a more relaxed fluid restriction regimen.

Macaques used in behavioural neuroscience experiments are often required to complete cognitively complex tasks, for which a high level of motivation is required. To induce motivation, researchers may implement fluid restriction protocols, whereby freely available water is limited, such that fluid can be used as a reward in the laboratory. A variety of different rewards and schedules are used but not much is known about their effectiveness. Many aspects of reward processing, such as reward uncertainty, have been investigated in the context of motivation in macaques but the knowledge has not been used to refine lab procedures.

The research carried out by Dr Helen Gray, as a PhD student at Newcastle University, quantified individual fluid preference in four male rhesus macaques given the choice of a range of fluids (diluted Ribena, fruit tea or fruit juices). The team found that the monkeys had individual preferences for different fluids, and moved on to evaluate the motivation ability of different reward schedules.

Schedules where the monkey could choose his reward (choice between preferred reward or reward used in previous experiments), or where the preferred reward arrived only 50% of the time (variable schedule), did not appear to increase motivation beyond simply being rewarded all the time with the preferred fluid. Importantly for refinement, the study showed that using a preferred fluid can allow restriction protocols to be relaxed (with daily fluid intake increased by 100ml) to achieve adequate performance in the task, but that this is dependent on the animal.

Because each monkey responded differently to both the fluid preference assessments and to the different reward schedules, the authors recommend macaques should not be subject to ‘blanket’ protocols but instead should be assessed individually to maintain adequate scientific data collection at the least severe level of fluid restriction.

The findings provide empirical support for the recommendations of an NC3Rs working group on refining food and fluid control, which reported in Journal of Neuroscience Methods in 2010 and 2012.