Ex vivo model for the study of epicardium-targeted therapies 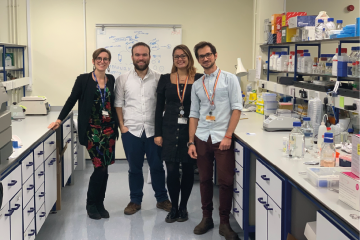 The recovery of the adult heart after injury, such as in a heart attack, is limited by the low number of regenerative cells present within the organ. More recently, it has been shown that cells from the epicardium, the external layer of the heart, are able to “home” to injured heart tissue and contribute to its repair. The models used to study this phenomenon are predominantly surgical models of myocardial infarction (heart attack) in small animals such as rats and mice. However, small animal models have substantial differences in the recovery ability and sensitivity of the cardiac tissue to injury, leading to issues in translation from these models to humans. In vitro studies can be performed using either stem cell-derived epicardial lines or primary epicardial cells, but these lack the complexity of an in vivo model where multiple cell populations exist in a niche.

This Project Grant aims to establish an ex vivo porcine cardiac slice model as a replacement technique to investigate epicardial cell proliferation, migration and differentiation in response to both heart disease and potential therapeutics. Cardiac tissue from pigs will be used as this more closely resembles human tissue, compared to small animal models, both physiologically and in regenerative potential.

The induction of myocardial infarction is a severe procedure as defined by the Animal (Scientific Procedures) Act 1986 because of the level of suffering caused. A pilot study to investigate epicardial cells required 40 rats to undergo this procedure. Dr Campagnolo estimates from her experience a laboratory can perform an average of five or six studies a year, which may require up to 100 animals per study. By contacting other laboratories focusing on epicardial studies, Dr Campagnolo estimates that approximately 5,000 animals per year are required for epicardial studies in the UK, including breeding, embryological studies, and models of myocardial infarction. The ex vivo cardiac slice model has the potential to replace up to 20% of these studies, resulting in 1,000 fewer animals required for epicardial studies per year in the UK. The epicardial-cardiac slices are prepared from the ventricular tissue of pigs and consist of epicardium and the underlying contractile myocardium. This tissue is obtained as a by-product from animals used in other experimental procedures.

Firstly, a culture technique that reproducibly obtains healthy slices will be optimised. Culture techniques will be assessed by analysing cell viability as well as the maintenance of the original structure and cellular composition of the slices. The effect of ex vivo culture on proliferation and apoptosis of epicardial cells will also be examined. To allow tracking of epicardial cells through the slice culture, enabling studies of their behaviour in response to external cues, targeted gene transfer via a novel nanoscale transfection tool will be used. This tool can deliver a range of molecules, such as DNA plasmids, into the cytoplasm of a cell with precise spatial definition. Initially, a GFP expression plasmid will be used as a proof-of-concept but this application could also be used for the evaluation of gene therapy approaches. The proliferation, marker expression, movement and differentiation fate of the labelled epicardial cells will be visualised in the 3D tissue, and where possible quantified using mathematical modelling. Finally, to increase the accessibility of the model, the use of tissue sourced from an abattoir will be assessed for its suitability.