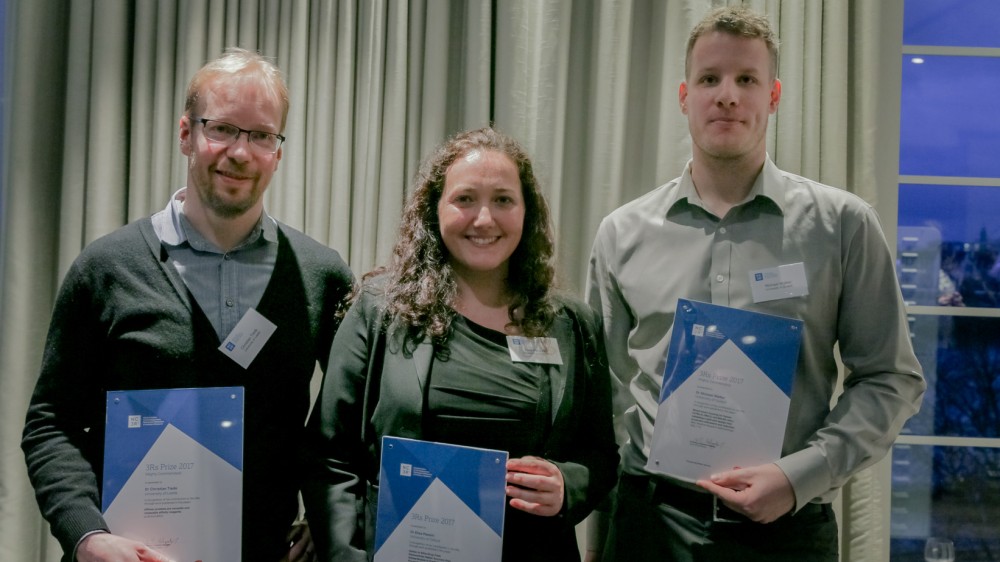 Work on an in silico model that predicts cardiotoxicity more accurately than animal studies has won the 2017 3Rs Prize, awarded by the NC3Rs and sponsored by GSK.

The winning paper from Dr Elisa Passini and colleagues from the University of Oxford and Janssen Pharmaceutica describes an in silico ‘drug trial’, where 62 drugs and reference compounds were tested (at different concentrations) in more than a thousand simulations of human cardiac cells. The computer model predicted the risk of drug-induced heart arrhythmias in humans with 89% accuracy while data obtained from previously conducted animal studies for similar datasets showed up to 75% accuracy.

Early prediction of cardiotoxicity is critical for drug development. Around 40% of drugs that were withdrawn from the market in 2001-2010 had cardiovascular safety issues in humans. The risk to cardiac safety is assessed in in vitro assays and animal models, with a range of species including rodents, rabbits, dogs and non-human primates being used. Estimates suggest that more than 60,000 animals are used globally for this purpose each year and the ‘Virtual Assay’ software developed by the Oxford team will reduce this number by improving the identification and elimination of cardiotoxic drugs prior to extensive animal testing.

Importantly the model also has the advantage that it represents the electrophysiological variability seen among patients. It outperforms other in silico approaches that average experimental data with a one-model-fits-all approach, and do not take inter-subject variability into consideration. The Virtual Assay software is already being used and evaluated by a number of pharmaceutical companies, and was also recognised as a breakthrough technology by the Safety Pharmacology Society Technological Innovation Award in 2017.

Dr Vicky Robinson, Chief Executive said “This is more great work from the Oxford team which really highlights the massive potential for computer simulations to replace animal use as well as provide meaningful human-relevant data that helps to ensure the safety of new drugs. The in silico drug trial is the validation that the pharmaceutical industry has been waiting for and I am delighted that the Panel selected this stellar paper for our annual 3Rs prize.”

The international 3Rs prize continues to be sponsored by GSK as part of its commitment to high standards in animal research.

Dr Pauline Williams, Senior Vice President, Head of Global Health R&D, GSK said, “At GSK we are committed to acting ethically in our use of animals and to maintaining high standards of welfare for the animals in our care. Applying the principles of the 3Rs is inherent in our drug discovery and development activities as we constantly strive to reduce reliance on in vivo animal studies. We are proud to support this prize for an in silico tool which has the potential to contribute to the safety assessment of investigational medicines and reduce the use of animals.”

The research was conducted in Professor Blanca Rodriguez and Dr Alfonso Bueno-Orovio’s group at the University of Oxford’s Department of Computer Science. Blanca and Alfonso are recipients of an NC3Rs Infrastructure for Impact grant to promote the profile of in silico human models for the 3Rs.

Watch Blanca describe the importance of the 3Rs and building collaborations here:

The prize consists of a £28k grant and a £2k personal award. The competition is open to researchers in academia and industry based anywhere in the world and recognises a paper published in the last three years that has significant impacts on the replacement, reduction or refinement of animals in research. It has been awarded by the NC3Rs since 2005 with sponsorship from GSK.

The winning research builds on work by the same team, awarded the 3Rs Prize in 2014. Dr Oliver Britton and colleagues then established a computer model that incorporated variations in ‘normal’ heart electrophysiological properties based on existing data from rabbit Purkinje fibres (cardiac cells). Oliver has subsequently been awarded an NC3Rs project grant to extend the same principles to pain research.

Virtual Assay will be available for download shortly in the Oxford University Innovation Store.

Read the University of Oxford's press release about this year's prize on their website.

The Prize panel nominated two entries for highly commended awards of a £4k grant and a £1k personal award:

Dr Christian Tiede from the University of Leeds and colleagues, for developing Affimers, ‘alternative binding proteins’ that can be made in the laboratory without the use of animals and can replace (animal-made) antibodies in a number of common molecular and cellular applications.

Dr Michael Walker and colleagues from the University of Guelph, Canada, for work on novel experimental designs with the potential to improve the statistical power of animal studies.

The research was funded by the Natural Sciences and Engineering Research Council of Canada and the Universities Federation for Animal Welfare.