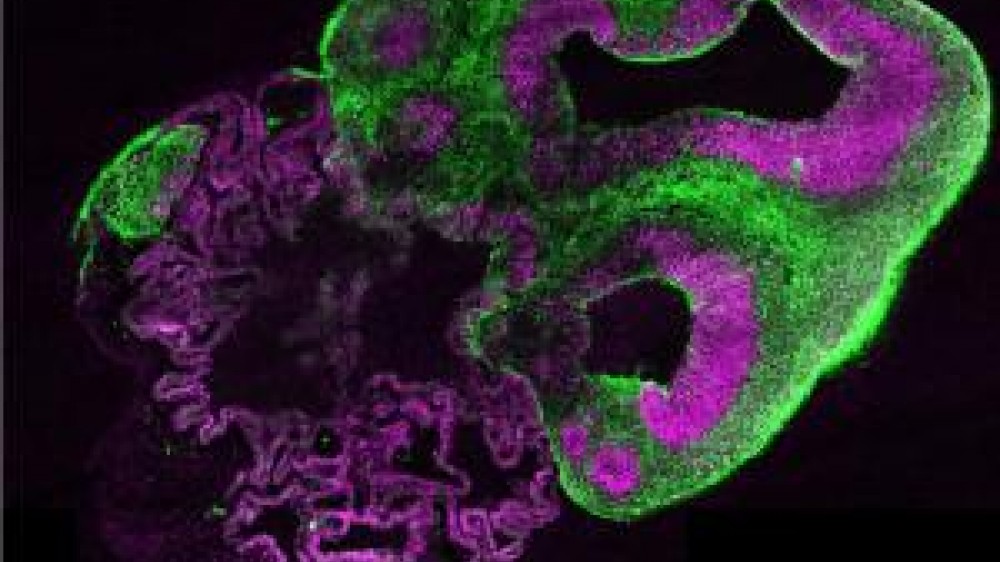 A study published in Nature reported the creation of brain organoids that mimic the developing human cerebrum for the very first time.

One of the authors, Dr Madeline Lancaster, who now works at the MRC Laboratory of Molecular Biology, has recently won the annual NC3Rs 3Rs Prize for this work.

2016 has been called “the year of the organoid”, and this is reflected in the choice of two papers for this year’s 3Rs Prize, including also a highly commended prize to a paper on cancer organoids. In recent years, using carefully adapted growth conditions, organoids from different organ systems have been developed including liver, intestine and kidney, and these provide an opportunity to replace some animal studies.

Currently, mammalian neural development is often studied in animal models such as mice and rats, but also in non-human primates and cats. The animals are used as a “surrogate” for human development but in many cases they do not recapitulate the anatomical and functional complexity required to study human brain biology and disorders.

Mouse embryos are most frequently used to study the development of the mammalian brain, and large numbers of pregnant female mice are killed to provide these. The mice are often genetically modified in order to investigate the impact of various genes on development, and the phenotypes resulting from modifications can compromise animal welfare.

In vitro models have the potential to capture the intricacies of the human brain more accurately than animals, but the challenge has been to model the whole brain and its complex functions, rather than single cell types or processes individually. Dr Lancaster’s work focused on creating 3D cerebral organoids from human induced pluripotent stem cells. She began this work as a post-doc in the laboratory of Dr Jürgen Knoblich at the Institute for Molecular Biotechnology in Vienna, Austria, where the team found that patient-derived stem cells were able to self-organise into tissues (organoids) and differentiate into discrete, interdependent brain regions, modelling the developing brain as a whole.

Dr Lancaster had to overcome a number of scientific and technical difficulties while developing the “mini-brains”. The brain tissue grows very quickly in vitro, up to 4 mm in diameter in two months. As the organoids grow, it becomes more difficult for nutrients to penetrate the more central regions of the tissue and for metabolic waste products to be removed, resulting in cell death and tissue necrosis. To successfully grow the organoids in 3D, the team developed a new process first using specialised Matrigel® matrix for support, then agitating the organoids (spinning) in culture to improve the availability of nutrients. As a result, the organoids are currently viable for up to ten months.

In the second part of the study, using skin cells from a patient with microcephaly (a disorder associated with the recent Zika virus outbreak), Dr Lancaster and colleagues created organoids that were smaller in size, consistent with the small brains seen in microcephaly patients. The researchers were able to pin-point the responsible mechanisms, showing that stem cells in the patient organoids differentiated to neurons too early and had disturbed orientation of the dividing mitotic spindle apparatus, which is crucial for early expansion of neural stem cells. This was particularly interesting since mouse models do not recapitulate the severely reduced brain size seen in human patients with microcephaly.

Using human tissue makes the “mini-brains” a particularly powerful method, as researchers can now ask more detailed questions about the human brain, without using animal models. This includes understanding basic processes which are unique to the human brain, as well as using patient’s cells to examine mechanisms of neurological diseases, such as schizophrenia or Alzheimer’s disease. A further potential benefit to the 3Rs would be to use brain organoids in a number of steps in the drug development pipeline, to find suitable drug targets or in high-throughput screening, to identify toxicity effects early and to screen out compounds destined to fail in later stages.

Dr Lancaster said: “So far, we are only able to reflect developmental disorders in the embryonic brain, but in the long run, we would like to extend our research to other disorders later on in development. This would include getting the neurons to mature, which we are hoping to achieve by taking a multidisciplinary approach such as working with tissue engineers.”

A commercial brain organoid kit is under development to disseminate the technique and make it possible for others to perform the new method for growing the organoids. The aim is to remove any stumbling blocks other laboratories and groups may have in applying the new technique themselves, thereby maximising the potential 3Rs impacts from this work.

Dr Lancaster has recently given a TED talk about her research.

Since publishing the paper in 2013, she has also started her own group at the MRC LMB, which will focus on developmental processes that regulate brain size determination, both in evolutionary terms and in relation to neurodevelopmental disorders that affect brain size. She said “I hope that by going down this path, we can learn something about what makes our brains unique and what goes wrong in the case of certain neurodevelopmental disorders like microcephaly.”

The money from the NC3Rs 3Rs Prize will be used to purchase equipment necessary to manipulate the organoids, to introduce mutations as seen in patients with disorders such as autism, and for functional studies of brain malformation such as macrocephaly. The team are also looking at equipment necessary to modify proteins involved in neurodegenerative diseases such as Alzheimer’s and Parkinson’s diseases. 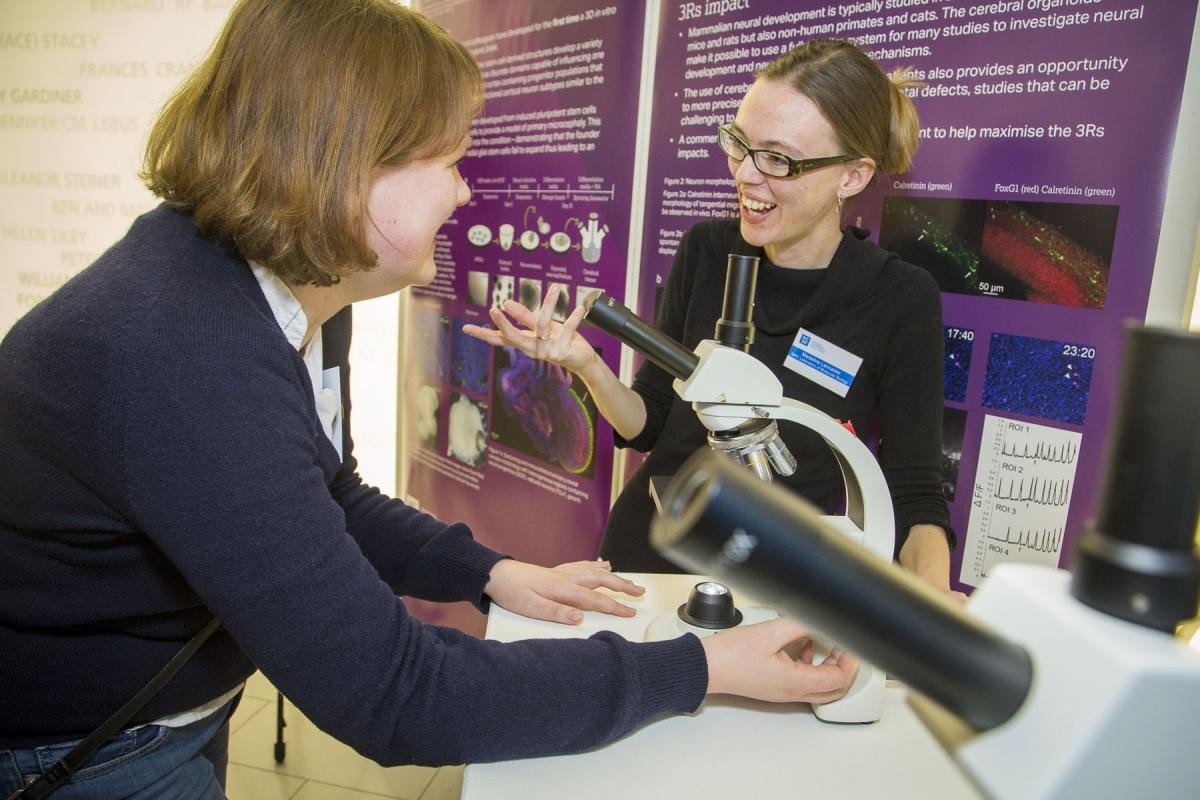 Dr Lancaster talks about her work to a guest at the 3Rs Prize ceremony. (NC3Rs)

The NC3Rs international 3Rs Prize, sponsored by GlaxoSmithKline, is awarded every year to highlight recent publications with exceptional contribution to scientific and technological advances in the 3Rs in medical, biological or veterinary sciences, published in a peer-reviewed journal in the last three years. The prize consists of a grant of £18k, plus a personal award of £2k. The applications are judged by an independent panel of experts and the prize is presented during an award ceremony, attended this year by more than 150 NC3Rs stakeholders and guests from the scientific community.

The NC3Rs Panel who assessed the applications and decided on the winners of this year’s prize said: “This is game-changing science – the first description of a 3D model of the developing human brain, and the first time such a system has been used to study a human neurological condition. The implications for minimising animal use as well as benefitting patients are enormous”.