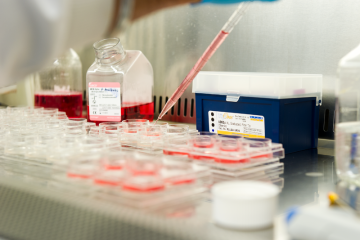 The Local Lymph Node Assay (LLNA) is widely used for testing the immunogenic and allergenic properties of chemicals in domestic or industrial use. The replacement of the test with a 3D human tissue culture model would reduce the use of animals by tens of thousands per annum and provide a model more predictive of human responses.

The LLNA is the gold standard regulatory toxicology test for skin sensitisation. It involves the topical exposure of mice to the test substance and after several days, examination of excised lymph nodes for T cell proliferation triggered by dendritic cells migrating from the exposed area. The interaction between the dendritic and T cells takes place in the extracellular matrix-rich region of the paracortex of the lymph node, and creating this environment in vitro will be critical for the success of the model. Previous work has shown the superiority of 3D versus 2D models but the former sets challenges for monitoring cell-cell interactions and for establishing a viable high throughput system for chemical testing.

This project brings together scientists in the fields of immunology, tissue engineering, biomaterials and microfluidics. The 3D model will replicate essential features of human lymph nodes such as the cellular and extracellular matrix composition, cell orientation and flow, and will be designed such that cell interactions, activation and differentiation can be studied. T cells and dendritic cells will be isolated or generated and used to select compatible materials, which do not affect immune cell function or activation, for fabricating a 3D scaffold/chamber which will permit fluid flow, simulating the human lymph node.

Conditions for culturing a variety of normal lymph node immune cells within the chamber will be established and methods for analysing immune cell interaction and responses developed. The system will be validated using a variety of chemicals, including those known to generate immune reactions, and compared to data from animal studies.

Every year, thousands of animals are used for testing the immunogenicity and allergenicity of many chemicals that are used in making healthcare, cosmetic, domestic and industrial products (e.g. paint &solvents). Currently the 'gold standard' assay used by industry to predict allergenic potential of new chemicals is called the Local Lymph Node Assay (LLNA). In this assay, animals (mainly mice or guinea pigs) are exposed to chemicals for a few days followed by injection of a radioactive tracer, subsequent euthanasia and excision of the lymph nodes for the investigation of T cell proliferation.

Whilst it is difficult to determine the exact number of animals used for LLNA, there are reports indicating use of nearly 10,000 animals per year for this purpose in the USA with an expected similar number used in EU. Therefore, not only because of our obligation to minimise animal suffering but also due to a recognized gap in terms of the biological relevance of animal models to human, there is a pressing need to develop human based alternatives to such animal experiments.

Lymph nodes are mini-organs that are scattered around the body and house different types of immune cells. The paracortex of a lymph node is where professional antigen presenting cells (e.g. dendritic cells) interact with white blood cells called T cells. Dendritic cells (DC) act as sentinels of the immune system and are usually located in mucosal surfaces and barrier tissues (e.g. skin) where they can sample the environment and capture any foreign material (microbial products or chemicals). Subsequent to this, they travel to a local lymph node where they interact with T lymphocytes, trigger T cell activation and initiate an immune response. In this project we have brought together scientists in the fields of immunology, tissue engineering, biomaterials and microfludics from the Universities of Nottingham and Harvard as well as an industrial partner with extensive experience in chemical testing and propose to develop a 3D tissue engineered model of the human lymph node in the laboratory. We will simulate many features of the human lymph node (e.g. cellular and extracellular matrix composition, cell orientation and flow) and design the model such that we can study cell interaction, activation and differentiation. Once established, this model would provide an invaluable tool for testing immunogenicity/allergenicity of new drug leads and chemicals and could reduce and possibly replace the LLNA.