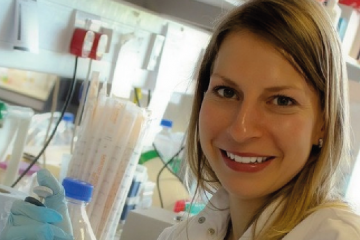 Metastasis accounts for the majority of cancer deaths, yet it is one of the most poorly understood aspects of tumour progression. In order to reduce metastasis associated mortality it is crucial to understand how, when and where metastasis occurs. Metastatic dissemination is a complex process that involves several steps which can currently not be recreated in in vitro culture systems. Thus, in vivo models are used, of which murine models of cancer are the most common.

Here, I aim to develop the chick embryo as a replacement for murine models of cancer. The chick embryo model is an excellent tool to study tumourigenesis and metastasis non-invasively as tumour cells can be easily engrafted onto its chorioallantoic membrane (CAM), an extraembryonic and highly vascularised membrane that is located directly beneath the eggshell and thus easily accessible. Within days, tumourigenesis and invasion occur and in the case of aggressive tumour samples, metastasising cells can disseminate to chick embryo's organs through haematogenous metastasis. Further advantages over murine models include its cost effectiveness, its simplicity and immunodeficiency, which allows the engraftment of any xenogeneic material. As the experiments will be terminated at E14, the proposed model is classified as non-protected under the Animals Scientific Procedures Act 1986 (amended 2012) and hence it is a valid animal replacement technique. Moreover, the chick embryo has the potential to be readily imaged in vivo using preclinical imaging and longitudinal high-throughput screening. Here I propose to establish its broader use as an exemplary in vivo model to investigate and intervene in tumour metastasis. This will be achieved by developing standard operating procedures (SOPs) for generating and detecting primary tumours as well as metastasis, and for the evaluation of therapeutics, thus encouraging a wide replacement of murine models for this purpose.