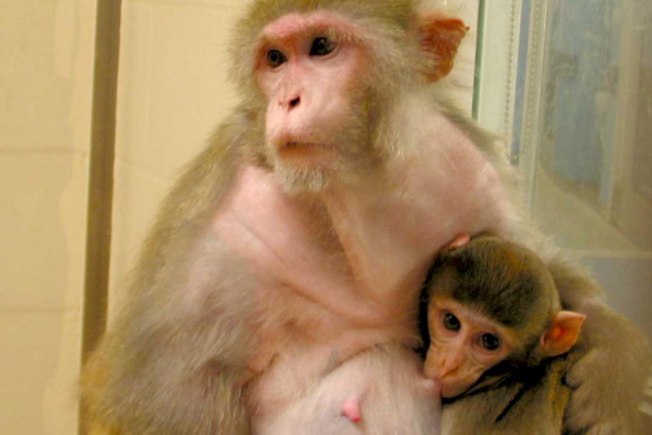 The early life experience of non-human primates can have serious implications for their welfare later in life. Despite this there is large variation in the age at which breeding centres permanently separate young macaques from their mothers.

We have led a study on the impact of weaning age on the behavioural and physiological development of macaques which has influenced policy at a number of breeding centres. Based on a review of the literature and analysis of colony data from a small breeding facility of rhesus macaques (Centre for Macaques, UK) and a large breeding colony of cynomolgus macaques (Bioculture, Mauritius) we have developed a framework for decision making on macaque weaning which was published in Applied Animal Behaviour Science.

Our study challenges the common view that early weaning, before the natural weaning age, increases the productivity of the colony. It also provides further evidence that it compromises the behavioural and immunological competence of young macaques. We recommend that unless there is strong justification for artificial weaning on scientific or animal health grounds, young macaques should remain with their mothers until they have become behaviourally independent. Minimum weaning age should not normally be less than 10 to14 months old, and weight, health and behavioural criteria should be used to determine the most appropriate age for the welfare of each individual monkey.

We have funded a PhD studentship to Professor Melissa Bateson of Newcastle University to assess the impact of weaning age on immediate and future welfare in macaques used for neuroscience studies.

An earlier PhD studentship with Professor Hannah Buchanan-Smith of the University of Stirling compared the survival, development, behaviour and welfare of common marmosets reared under different husbandry practices in order to identify the best breeding and rearing methods.